Presented by OpenSnow, check out their winter forecast below.

Confidence is growing that we will see a 3rd consecutive La Niña winter, and recent trends indicate we could be heading into our strongest La Niña since the winter of 2010-2011. 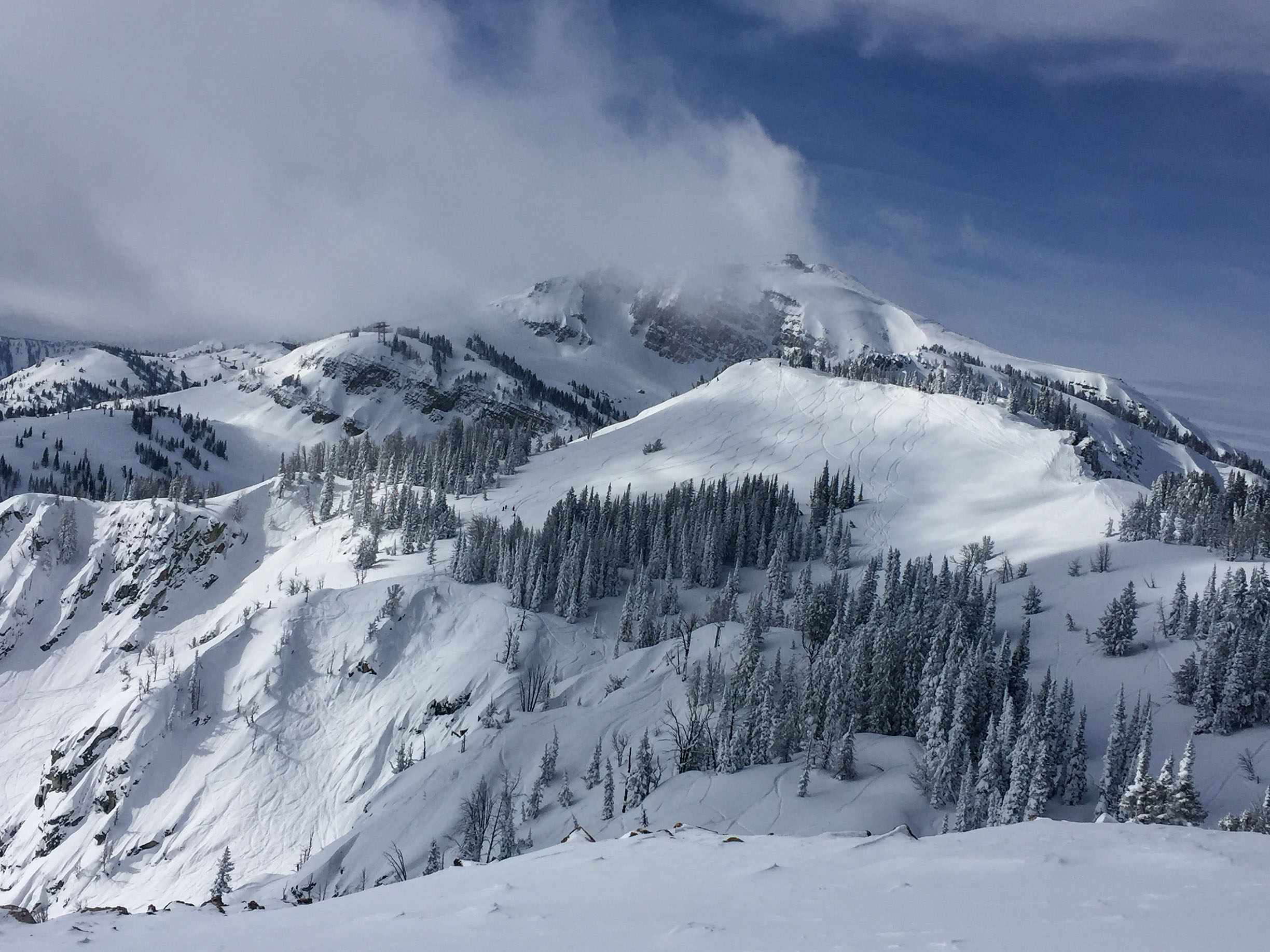 Historically, strong La Niña years often result in abundant snowfall at Jackson Hole. The latest trends indicate we could be heading into a strong La Niña pattern during the winter of 2022-2023.

The 2022-2023 winter season is just around the corner and many of you are already curious about how the upcoming season will shape up in the Tetons.

Winter outlooks contain an inherent degree of uncertainty since so many factors in the atmosphere are not predictable months or even weeks in advance, while climate change is also adding to the complexity of seasonal outlooks.

However, there are a few variables including ENSO (the El Niño Southern Oscillation) that can provide some clues. And the good news is that, based on what we do know, the outlook is favorable for Jackson Hole this winter.

LA NIÑA EXPECTED TO CONTINUE THROUGH THE WINTER OF 2022-2023

A La Niña pattern has persisted into the summer of 2022, and long-range models are projecting La Niña to continue into the winter of 2022-2023, before possibly weakening in the spring of 2023.

If another La Niña were to verify this winter, it would only be the third time since 1950 that three consecutive La Niñas occurred. 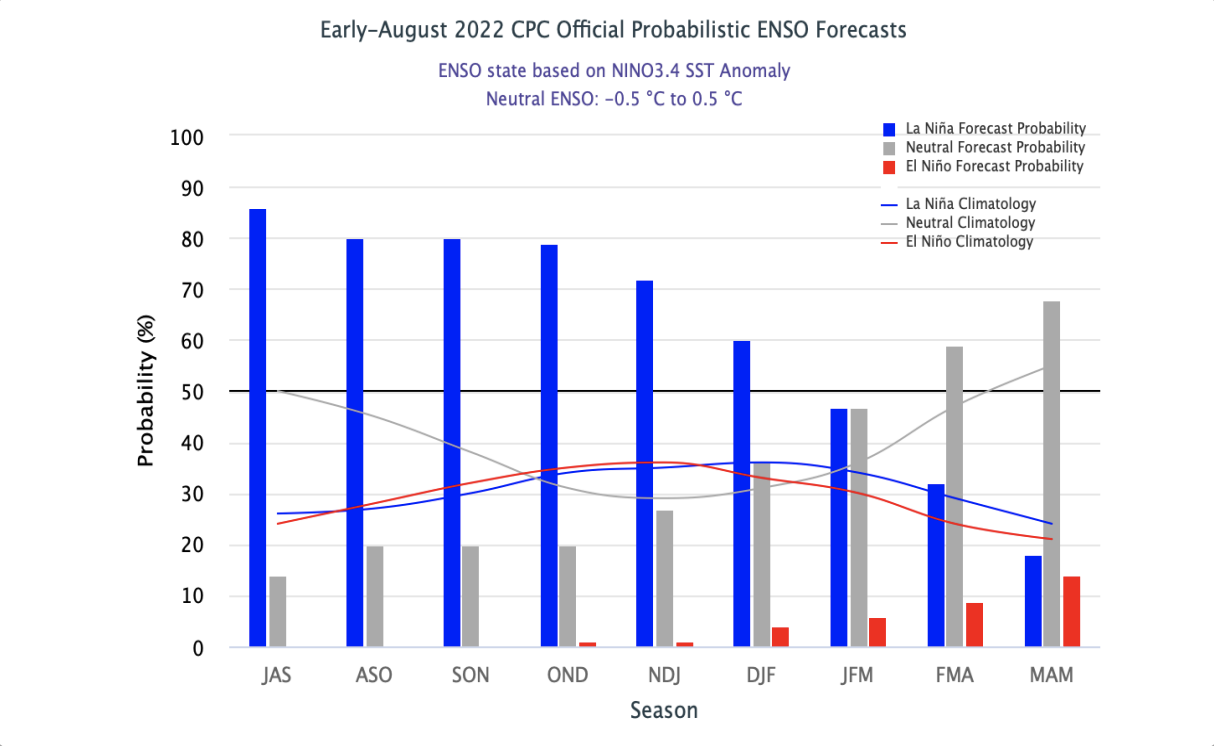 Image: NOAA Forecast showing the probability of a La Niña, El Niño, and Neutral phase for each three-month period between the summer of 2022 and the spring of 2023. Blue bars show the percent chance of a La Niña and the “DJF” label is for “December-January-February”.

WHAT IS LA NIÑA?

The term La Niña refers to the large-scale ocean-atmosphere climate phenomenon linked to periodic cooling in sea-surface temperatures across the central and east-central equatorial Pacific.

La Niña represents the cool phase of the ENSO cycle and means that the ocean water temperatures are cooler than average.

The pattern is defined as a La Niña when the following criteria are met in the east-central equatorial Pacific:

1) The average sea surface temperatures in the Niño-3.4 region of the equatorial Pacific Ocean were at least 0.5°C (0.9°F) cooler than average in the preceding month.

2) The average anomaly of at least -0.5°C (-0.9°F) has persisted or is expected to persist for five consecutive, overlapping 3-month periods. 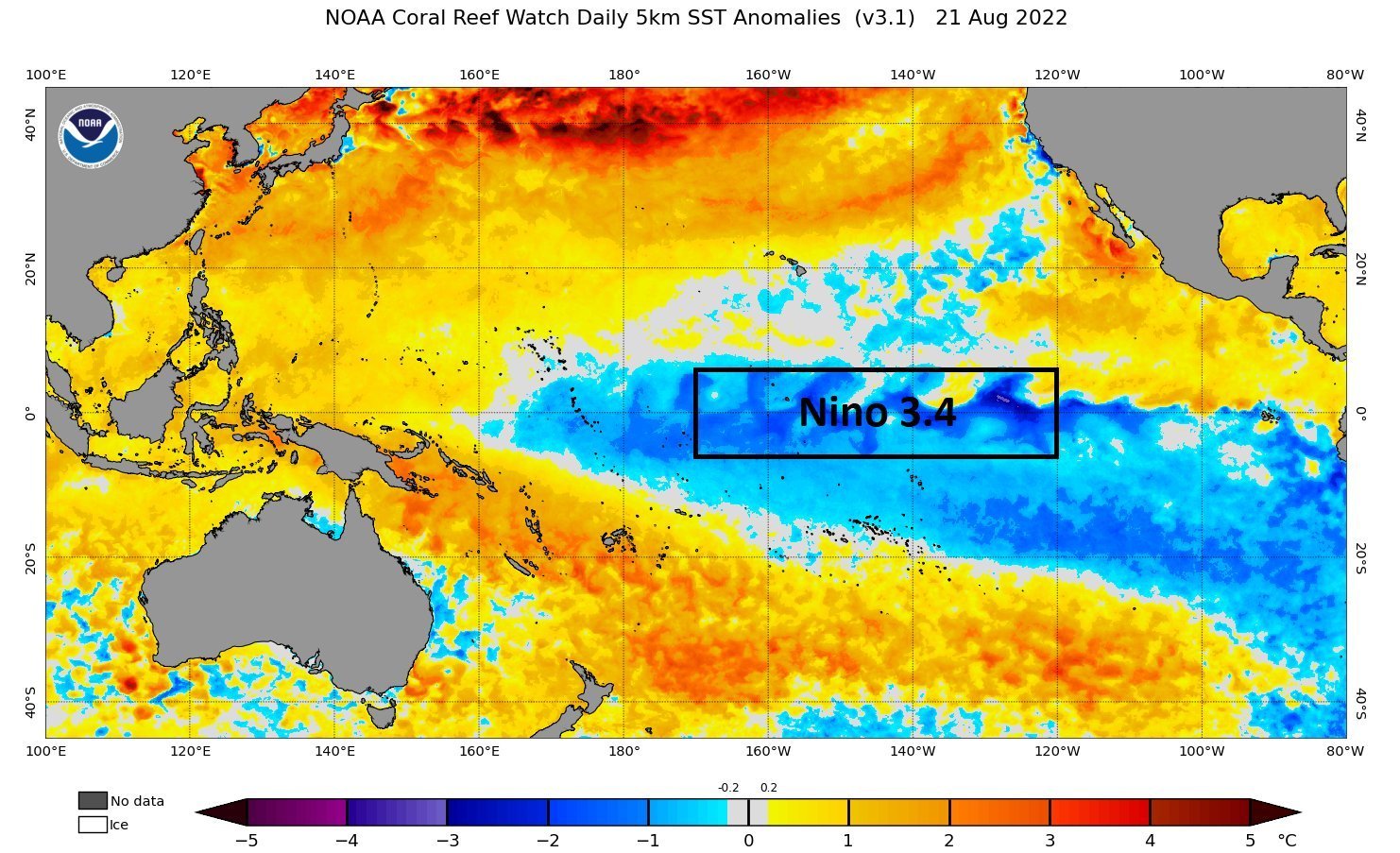 Sea surface temperatures in the central and eastern equatorial Pacific are well below average, which is a classic sign of a La Niña.

Not only are we expecting another La Niña this winter, but we could be looking at a strong La Niña pattern. A strong La Niña is one in which the sea surface temperature (SST) anomaly is -1.5ºC or lower. Only seven strong La Niñas have occurred since 1950, with the last two occurring in 2010-2011 and 2007-2008.

As of late August 2022, the weekly Niño-3.4 region index (sea surface temperatures in the east-central Pacific) anomaly has decreased to -1.2°C. This is the coldest weekly SST anomaly in August since 2010.

This is important because, historically, August and/or September SST anomalies of -1.0ºC or less have resulted in a strong winter La Niña 100% of the time (7 out of 7 instances) dating back to 1950. In other words, the probability of a strong La Niña this winter is high. As we'll examine below, is a good sign for Jackson Hole snowfall.

WHAT DOES THIS ALL MEAN FOR JACKSON HOLE SNOWFALL?

By itself, La Niña years correlate to above-average snowfall. Fortunately, the Bridger-Teton Avalanche Center provides outstanding historical snowfall data for Jackson Hole Mountain Resort dating back to 1974-1975, so we have a lot to work with when it comes to evaluating historical trends.

Jackson Hole measures snowfall at several different locations on the mountain, with snow reports taking data from the upper mountain, where the best snow conditions are typically found due to favorable orographics and colder temperatures. The Rendezvous Bowl measurement station is where we examine upper mountain snowfall dating back to 1974-1975. 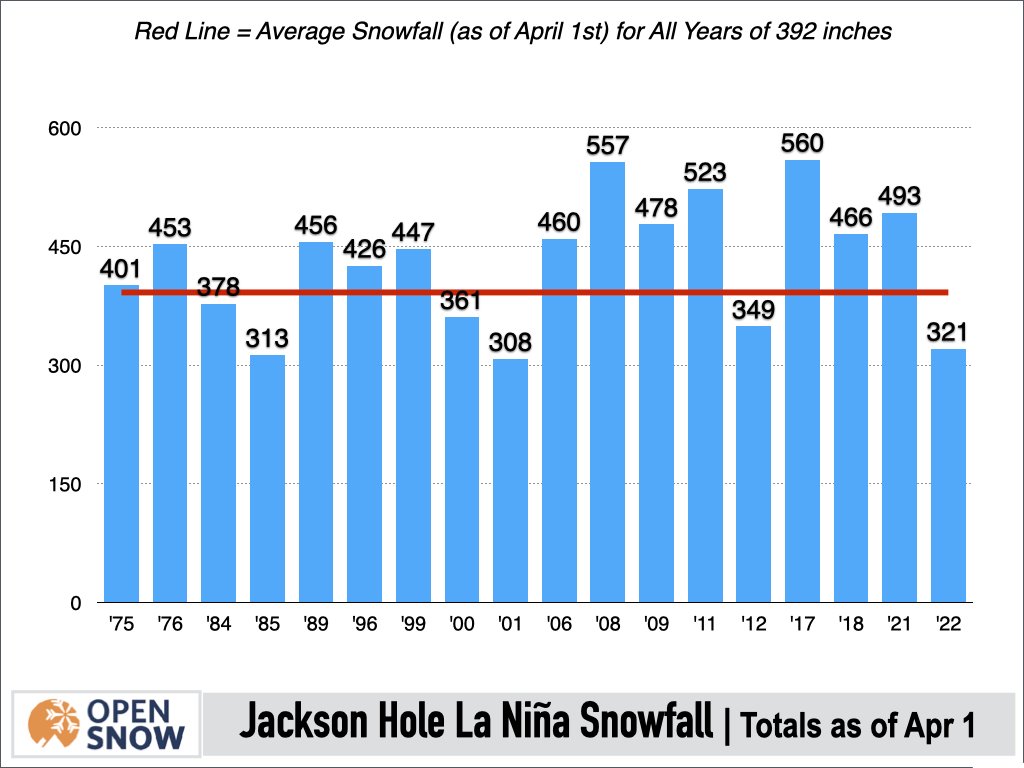 Now, you may be thinking, what about last winter? We were in a La Niña last winter, but it still turned out to be a below-average snow season. Even though La Niña correlates to good snowfall in Jackson Hole, it doesn't happen every year and frankly, we were due for a below-average winter following a record six consecutive above-average winters from 2015-2016 to 2020-2021.

The good news is that there are some other signals that we didn't have last season that are tipping the odds in favor of better snowfall this season.

First, as previously mentioned we are likely heading into a strong La Niña winter, whereas last winter we were in a moderate La Niña. While weak to moderate La Niñas can also lead to good winters, there is a better correlation between Strong La Niñas and above-average snowfall at Jackson Hole. 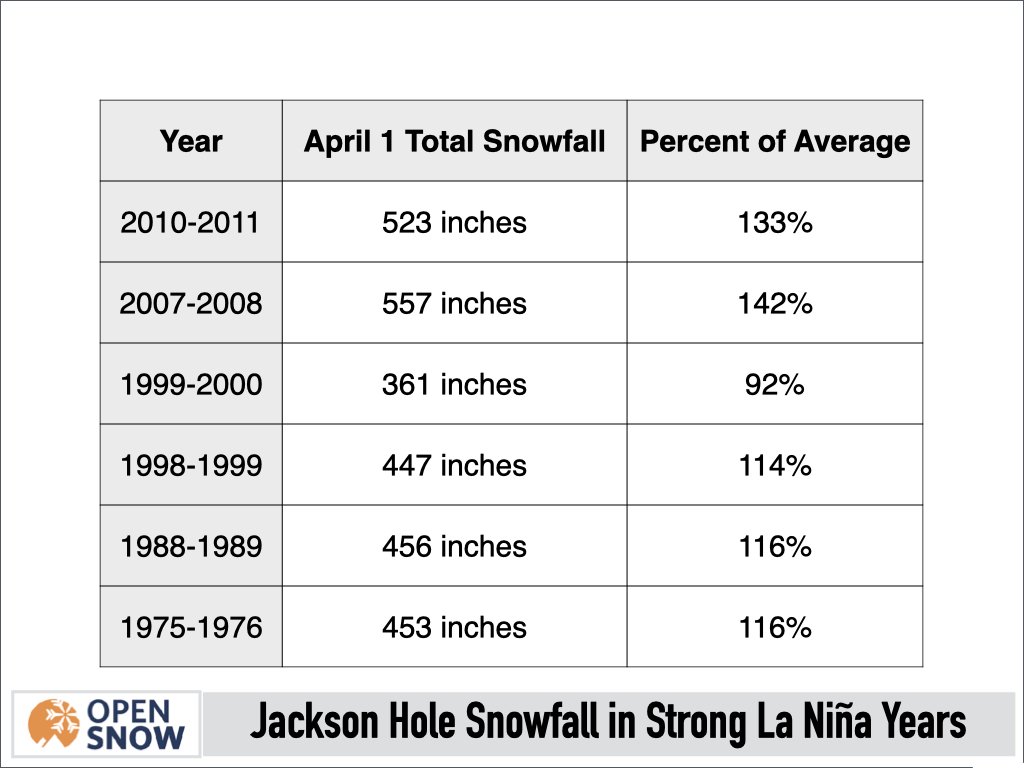 Another long-range variable that can influence winter patterns is the Quasi-biennial Oscillation (QBO) which describes trade wind patterns in the tropics. A westerly phase of the QBO is expected to occur this winter, which is a phase that has shown some correlation with above-average winter precipitation across the Western U.S. including Jackson Hole.

Also, winters in which both a westerly QBO phase and a La Niña occur simultaneously are usually a good sign for snowfall in Jackson Hole.

There have been five such winters in which a westerly QBO and a La Niña have occurred, and in four of those years, snowfall was above average at Jackson Hole. 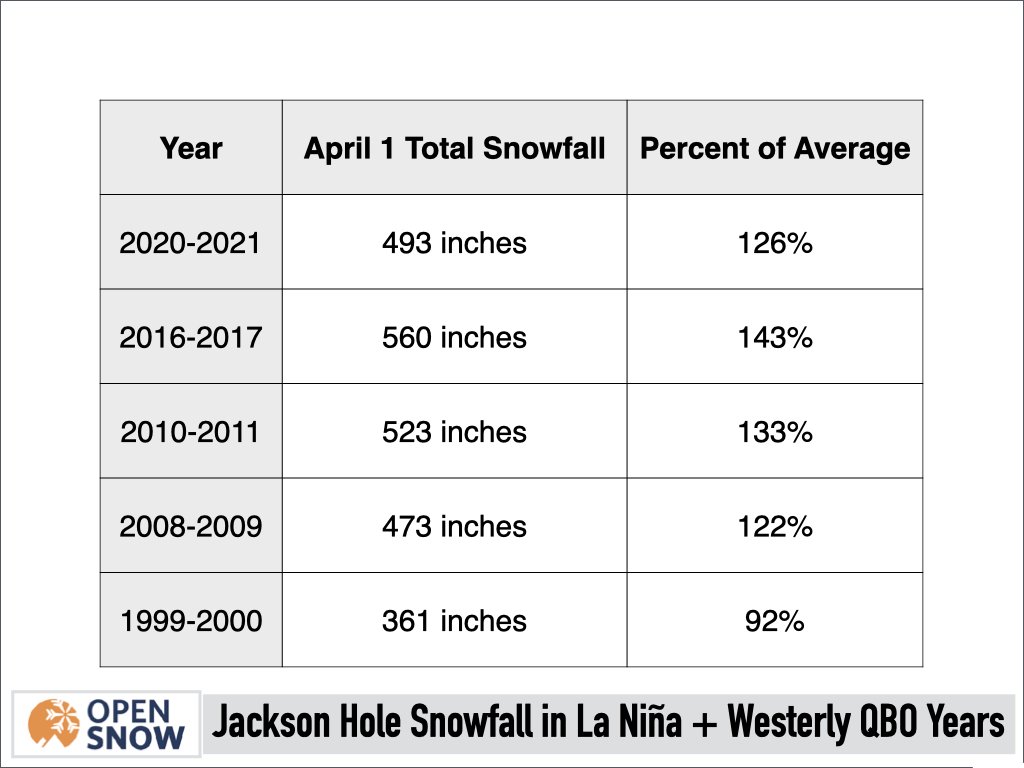 Seasonal forecasting for winter is inherently challenging and there are always variables at play that we cannot predict months in advance. However, given what we do know, the signals pointing toward an above-average snow year in Jackson Hole are about as good as we can ever reasonably expect.

So while there are no guarantees, the odds are looking more favorable than usual for this to be a deep snow year in Jackson Hole and the Tetons. Fingers crossed!

Your Guide to Fall in the Tetons

The Graham Faupel Mendenhall Team has established a reputation of exceptional service, creative solutions, consistent execution and unparalleled results. We’re ready to get to work for you, contact us today for your home valuation or to learn more about Jackson Hole.